What is Medronho? Today Algarve Housing will inform you about a typical Portuguese drink and fruit of the Algarve! It is hard to miss this while you are on holiday in the Algarve. Therefor we like to share a few details about medronho, or firewater in the Algarve! 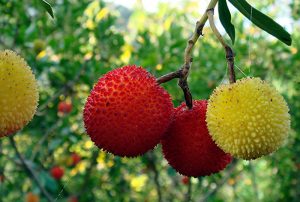 “A glass of medronho?” Barely over the steps of a South Portuguese door and the local brandy is already shoved in your hands. And who had dinner in a Portuguese restaurant most probably was offered a little glass of medronho of the Algarve. In the Algarve, hospitality is synonymous with this very popular drink. For centuries, the art of distilling has been passed on from father to son.

Medronho is a pretty looking fruit

It is made from the fruit of the medronho tree, translated as the wild strawberry tree, although no strawberry grows on it and it has more the look of a lychee. Handpicked between October and December in the heart of the Algarve, mainly the Serra de Monchique and the Serra do Caldeirão, it is then put to ferment during two to three months.

If you drive through the beautiful inland hills of the Algarve, and you can see smoke coming out of little chimneys between January and April, it’s a safe bet that some firewater is being produced.

Agua ardente, literally, means “burning water” in Portuguese, which is exactly what it does: with its high alcohol percentage (around 50%), it burns your throat all the way down to you belly, where it will softly nestle.

The locals like to start the day with a shot, to wake their spirit, and it is also commonly drunk  alongside a “bica”, a shot of coffee, after lunch or dinner. Popular beliefs state that nothing beats the anti-grippe of the Serra, medronho and honey, to cure you from any vicious cold. If you’re still not convinced, you can try the Medronho fruit itself, which is high in antioxidants, or processed in jams and preserves. Your health will thrive!

Increasingly considered as a natural heritage of old cultural wisdom that is kept alive, touristic medronho routes and other events related to medronho are being developed, especially in Monchique area.

Finally, studies have shown that the medronho tree is one of the quickest to adapt to climate changes in the Algarve and to recover after fires, and that it can even be used efficiently in the protection of fires.

Take a shot of medronho, enjoy your holiday in the Algarve even more, and contribute to a better Algarve!

This article has brought to you by Algarve Housing, for better holidays in the Algarve