Algarve Housing likes to inform you about a very special event:

The Dance of the Bears show.

Inspired by the Buddy Bears exhibition in Berlin in 2002, Karl Heinz Stock has coordinated the works of a team of sculptors and artists of the Algarve to develop his own Dance of the Bears show.

In 2008 Karl Heinz Stock and his team of sculptures and crafts people began creating virtually life size sculptures of bears.

The concept behind the show is described by Karl Heinz Stock as one of “Evolution” and 15 painters and mosaic artists decorated the life sized bear sculptures within this abstract theme.

The bears will be on show the 11 of July till 23rd of July at ‘Praia dos Pescadores, (Fishermen’s beach) Carvoeiro. The opening starts at 7pm with a wine tasting, music and entertainment! 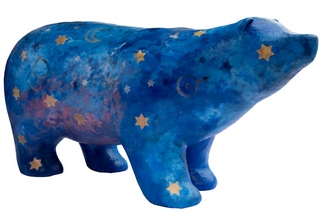 “The Bear awakes in the spring after his long Sleep”

Since the beginning of time bears captured man imagination, in many civilizations bears often were represented in art, as a symbol strength, and capacity of adaptation to changes. Mankind and art have moved on from the ancient concepts of its early age. Many years have passed and the bear still sparkles as a symbol in modern society for is endurance, perseverance, and capacity of having adapting, characteristics that we humans aspire and admire.

In most fairy tales and expressions bears are still venerated both by their physical strength and their big heart (a good example for this is the Russian Bear: very strong but nevertheless a soft heart).

We needed a medium to transform two-dimensional paintings into a three dimensional object. The medium had to be the same for everybody to ensure the same “starting positions”. It could have been something neutral like a square, a triangle or a sphere, which would have been a kind of three dimensional canvas. Or –as happened before- more individualised animals like a dolphin, a penguin, a cow or also a bear (Berlin Buddy Bears). 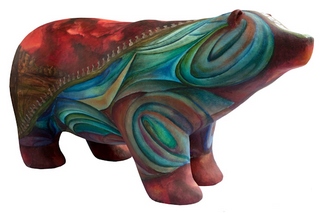 “I have decided to use a bear in his normal habitual position”. The bear itself is not directly the theme of the exhibition but more the medium to transfer and translate the message to the viewers. Nevertheless the characteristics of a bear and the myth surrounding him can be integrated into the final artwork (immense strength combined with cautiousness, he will always prefer to trick an opponent in his tracks instead of attacking, he is actually less aggressive than humans, prudent behaviour, high ability to adapt to different surroundings and situations, eagerness to migrate, multicultural; big heart.

The physiognomy of the sculpture has been kept purposely relative discreet in order to present a wide scope for development of the finalising artist’s expression.

Don’t miss this special event Saturday 11th of July at Carvoeiro Beach; every single bear has his own decoration, by 15 different artists from the Algarve.

There will be about 20 bears, something different! Every artist has given their special theme to the bear.

Algarve Housing will inform you about special things to do in the Algarve. If you have an event to promote, let us know, and if you don’t want to miss out, please subscribe to our news blog.