The Algarve is the most southern part of Portugal. Portugal is part of the Iberian Peninsula formed together with Spain.

All our rental villas located in beautiful region Algarve Portugal. We have villas for rent near the coast. Further inland of the Algarve Portugal we rent some nice luxury villas near the historical Silves  with its Moorish castle. And last but not least, we have some fantastic villas for rent in the Monchique mountain area, in the hinterland of Portimão.

Albufeira, once a small fishing village it has now developed to be a very touristic area. Many holiday makers return year after year because of the lovely beaches, very good climate, proximity of many restaurants, bars and pubs.

Alte is the oldest village in Algarve Portugal. Alte is located in the hills of Serra do Calderao and very picturesque. The village has some nice features like a waterfall, cosy bars and fine restaurants. Enjoy the real Algarve. Enjoy Alte.

Alvor is a lovely picturesque village in Algarve Portugal. With lots of bars, restaurants, live music, a beautiful lagoon and a long stretched white sandy beach, Alvor is a wonderful place to visit in Portugal.

Faro is the capital of Algarve Portugal and mostly known because of the airport. But the town is absolutely worth a visit. Faro offers a historical centre, a fisherman's harbor, a nice shopping area and a fantastic beach at Faro Island.

Ferragudo with its Roman castle is the most picturesque fisherman's village of Algarve Portugal. Here you can still see the fisherman at work. It has a nice beach with lively beach bars where you can eat, drink, dance and enjoy your holiday in the Algarve.

Lagos is situated in the western part of Algarve Portugal. The old town of Lagos has a nice pedestrian area with shops, bars and restaurants. Furthermore the marina, lively nightlive and beautiful beaches are famous.

Messines is a tyical market town in the central part of Algarve Portugal. Here you can find the real Algarve. In Messines the locals enjoy their 'bica' (espresso) while playing domino or talking about the latest orange prices.

Olhão is located just east of Faro in Algarve Portugal. Here you can find the real fisherman's life, with the best and largest daily fish market of the Algarve. A ferry takes you to the islands of the Ria Formosa.

Portimão is a lively city in Algarve Portugal. With lots of bars and restaurants, the largest shopping centre of the Algarve, an international racing circuit and the yearly Sardine Festival, Portimão should be on your sightseeing list!

Sagres is a village in Western Algarve. It lies close to the farthest western point of the Algarve, Cabo de São Vincente in Portugal. Sagres is very popular with surfers. The waves, beaches and fish are excellent!

Silves is a historic town in the Algarve. It has a Roman bridge, a castle and an old centre with narrow, winding and cobbled streets.The medieval festival in August is worth visiting! Silves is a very pleasant place to visit in Portugal.

Vilamoura is famous in Algarve Portugal because of the Marina (harbour) and numorous golf courses. All year round golfers and tourists are enjoying themselves in the harbour at the nice terraces, bars, Irish pubs and restaurants.

Each region of Algarve Portugal has its own character and charism.

Eastern Algarve is relatively quiet and peaceful. This part of the Algarve offers a lot of beautiful nature and several natural parcs. The beaches are beautiful and quiet.

In Central Algarve you will find a lot of lively coastal resorts which offer restaurants, bars, pubs, shops, boulevards and souvenir stalls. There are lots of possiblities for watersports and other leisure activities. Central Algarve Portugal has some of the finest beaches of the Algarve and a spectacular coast with golden rock formations.

Western Algarve also offers some very fine beaches. The most western part of Algarve Portugal is famous for its surfing conditions. Along the coast you will find a lot of laid back villages, a beautiful unspoiled nature and some attractive historical towns.

Algarve Housing has put some social and geographical facts of Portugal, for you:

South of the Tagus, it is wide plain and rolling hills that make up the landscape, planted mostly with Mediterranean trees like the cork oaks, olive trees, figs, vineyards.

The number of inhabitants of Portugal lie around 10,29 million (in 2018). Most live concentrated along the coast, especially around the capital, Lisbon, and the second major city, Porto. The regions of Alentejo, the interior area of the Algarve, Trás-os-Montes and Beiras have very low density.

1974, with the Carnation revolution that ended a 22 year-long dictatorship, that a Democratic Republic was installed. A President is elected every 5 years as the chief of State and representing the Nation. He then appoints a Prime Minister, who is head of the Government and appoints the Council of Ministers.

The predominant religion in Portugal is Christianity. 81% of the nation is catholic, although most do not practice very actively. However, it is a very common tradition to have your children baptized, to marry in church and to receive the Last Rites.

Over the past decades, the government has privatized many state-controlled firms. The country's economy was badly affected by the financial crisis in 2007-2008, but has since 2014 recovered significantly. However, struggles are still tangible, and the minimum wage was only 557 euros in 2017.

Algarve Housing hopes that with this bit of background information on Portugal, you become more aware of the country you have chosen as your destination and makes you Portugal holiday even more interesting.

Algarve Housing rent villas in the Algarve. Please have a look around for your private paradise in the Algarve, or contact me for any more information. 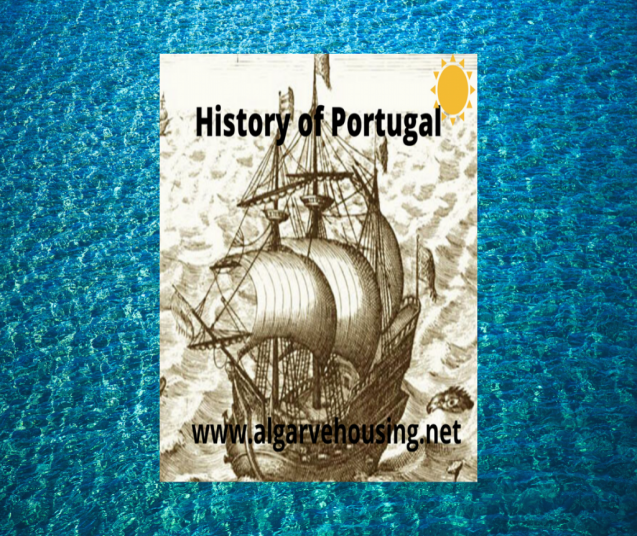 While you are on holiday in the Algarve, you will see many historical remnants of different eras.  Algarve Housing has put the main historical era's that had a great influence on what Portuguese culture is today, in a row. Let’s talk history of Portugal:

After the Restauration War, from 1640 till 1668, it managed to defeat Spain, who recognised Portugal's independence.

Napoleon and the First Republic

In 1926, a Military Coup brought an end to the First Republic, the beginning of a long dictatorship led by Salazar with nationalism and isolation as his guiding motors. He established the Second Portuguese Republic in 1933. Nearly half a century of oppression and censorship followed, pushing Portugal into national poverty and social divide. Alongside the suppression of the increasing pressure for independence from the Portuguese Colonies that cost many Portuguese lifes and a lot of money, this led to a peaceful Carnation Revolution on the 25th of April 1974 by the military, without one single gunshot. An end was made to a dictatorship that left a deep impact on the population. This day is a national holiday still celebrated every year in Portugal

Democracy was installed, it marked the beginning of the Third Republic with its first elections in 1975. All remaining Portuguese colonies were granted independence. However, the first ten years of the 3rd Republic were years of economic trouble. In 1986, Portugal joined the European Union. The growth of many of Portugal's main exporting companies and the European Union's structural funds were leading forces in a new period of robust economic growth and socio-economic development which would last to the early 2000s, when Portugal joined the Euro.

The Algarve villa rental company for better Holidays in Portugal. A hand picked selection of unique holiday villas, with private swimming pools and gardens in the Algarve Portugal.

We recommend to rent a car to explore the beautiful Algarve. Please contact us for any further information.

Airport Transfer? We have good contacts to take you from and to the Faro Airport.