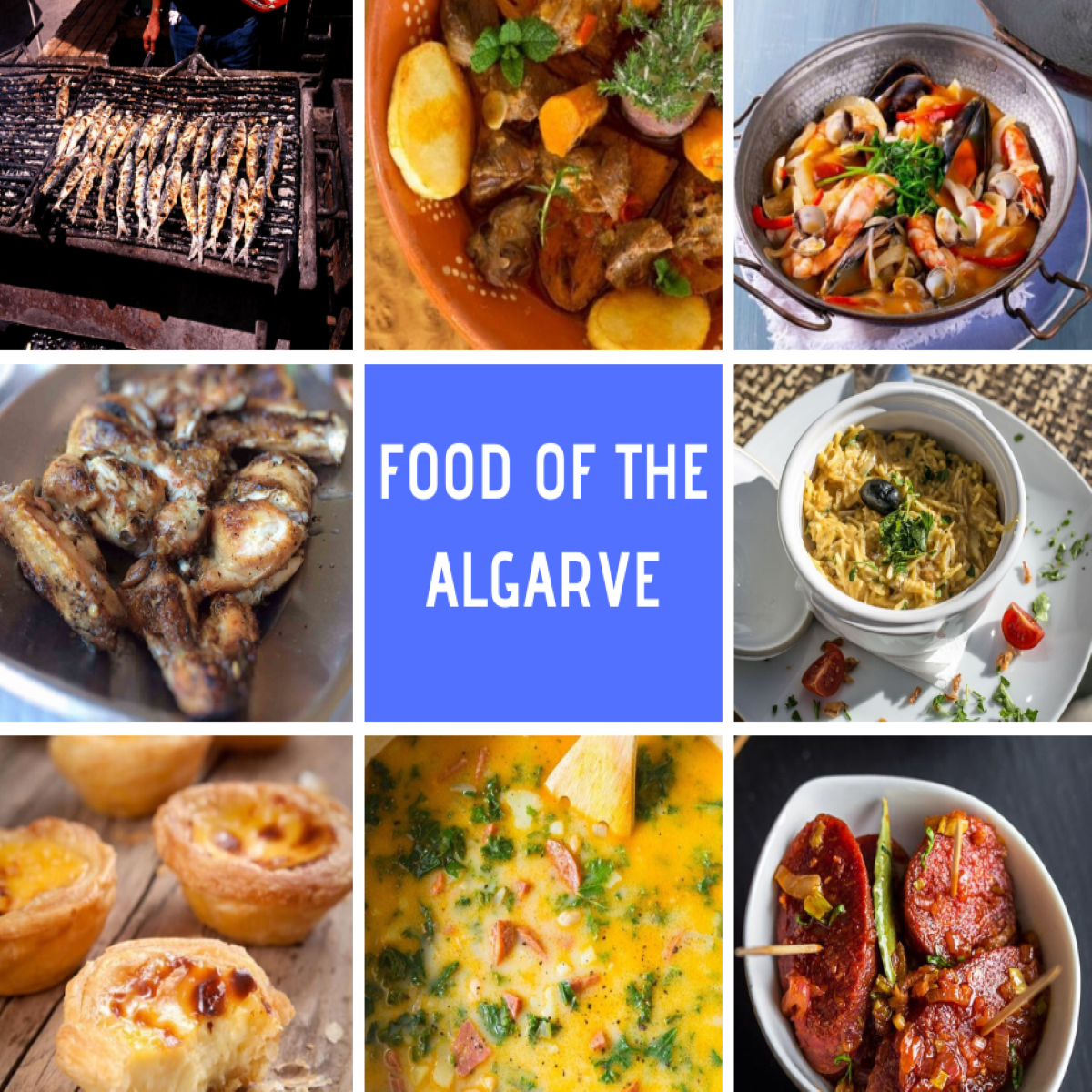 A great part of the pleasure of a holiday in Portugal is to have all the time in the world to enjoy the local food of the Algarve. Preferably accompanied by a glass of good wine. Good news: you are in the right country! Portugal has a wide variety of savoury dishes that are both influenced by the Atlantic Coast, and by the inland farmer’s food. Enough to try throughout Portuguese food during your time in the Algarve, washed away with one of the many quality wines of Portugal!

Food is a very important part of Portuguese culture: the Portuguese love eating, and while eating, they are either already thinking about the next meal or talking about food, exchanging recipes and secrets of regional family specialities. They are even willing to drive more than a hundred miles for a specific dish in a specific restaurant in Portugal!

If you want to eat well, go where the locals go: often un-cosy restaurants with big, bright lights and several televisions on. Let’s get things straight: it’s not about the atmosphere, it’s about food!

Algarve Housing has put some of the traditional Portuguese food dishes you should not miss in a row: 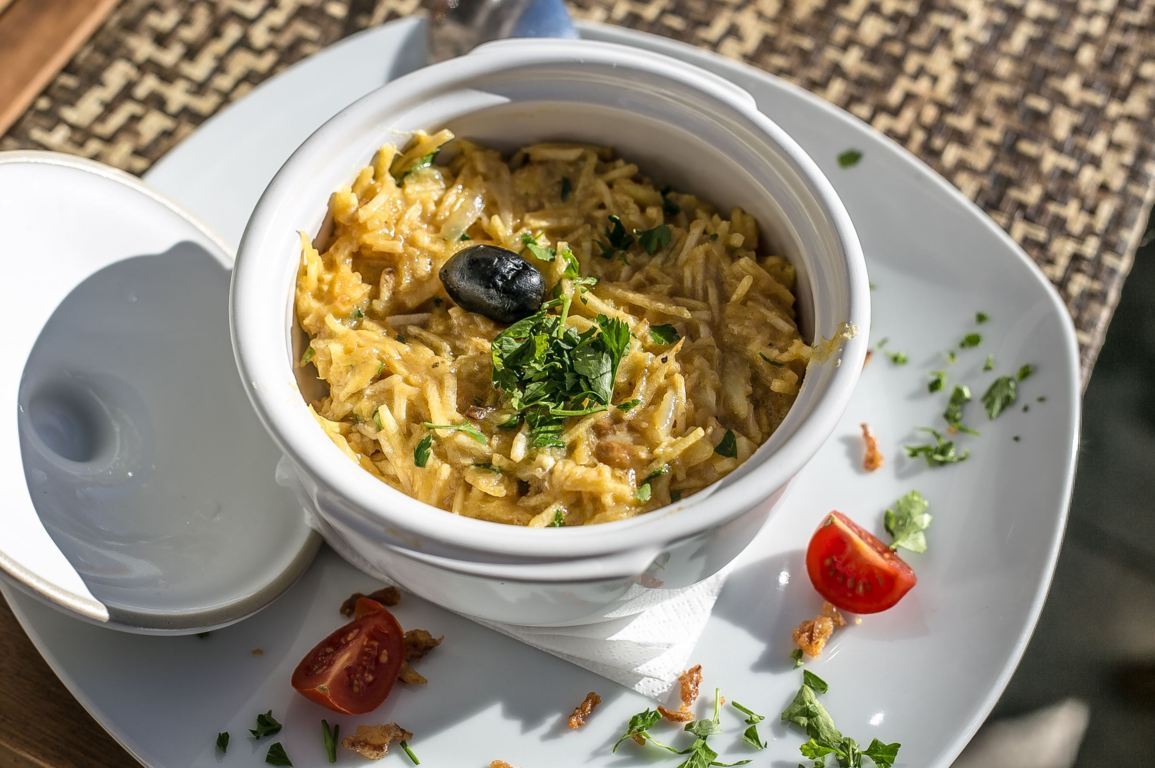 This salted, dried codfish comes in many shapes and sizes. Portuguese say there are more bacalhau recipes than there are days in a year. Some of our favourites are bacalhau com natas (shredded codfish with potatoes and cream in the oven…delicious!); bacalhau a brás (shredded codfish sauteed in a pan with lots of onion and straw thin fried potatoes, eggs that cook while mixing in and topped with parsley and black olives); bolinhos or pasteis de bacalhau (deep-fried codfish cakes made with potato, onion, parsley and eggs), great as a snack with a beer! 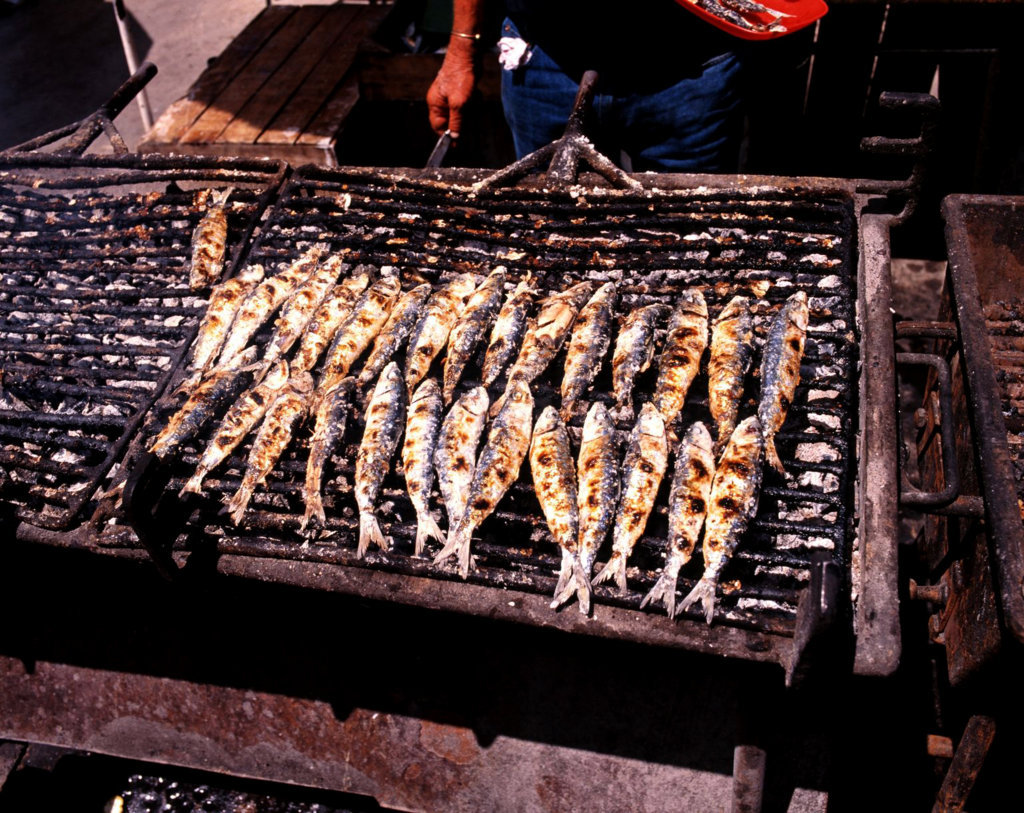 Not to be missed this food of Portugal, and very popular with the Portuguese during summer. Particular in the month of June: a plate of grilled sardines. They roast them whole, on an open-fire grill, with merely some sea salt sprinkled over them, and are often eaten with bread, to soak up all the juices, or served with boiled potatoes in restaurants.

You will find Sardine Festivals all over Portugal in June. In the Algarve, Portimão has a legendary one. 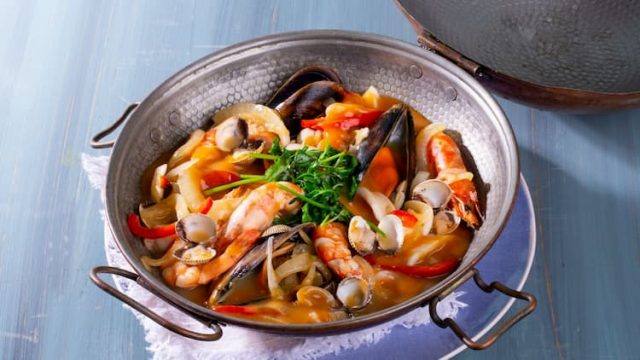 The cataplana is original food from the Algarve and owes its name to the copper pan.  (with two rounded sides that are connected by a hinge that open and close like a clam). It comes in all kinds of varieties. Usually chouriço, chicken or pork meat and seafood are mixed in a wonderful stew with onions, garlic, tomatoes and white wine. A true feast of tastes that you often need to share with at least two persons in restaurants. To my opinion the food of the Algarve that you cannot miss! 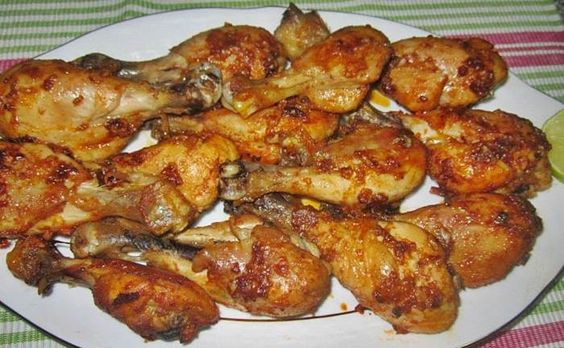 Widely spread and deliciously simple (and cheap!): the famous frango piri-piri, grilled chicken sprinkled with a spicy piri-piri sauce. This sauce is made of hot red peppers. Many restaurants boost to have the best in the Algarve, and Guia even calls itself the capital of the frango piri-piri.  You decide for yourself… Another one, you cannot leave Portugal without having a typical food of Portugal, chicken piri-piri! 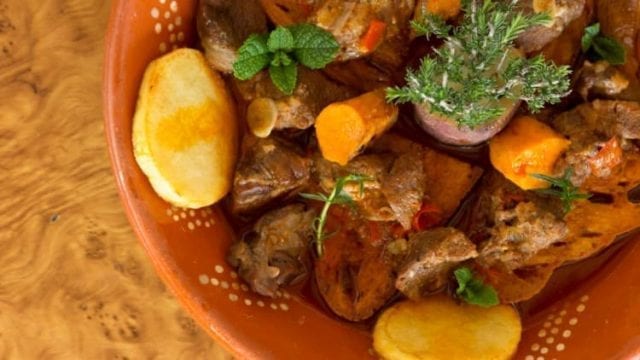 If you like game, you should absolutely try this stew made of wild boar in a tomato sauce sprinkled on top of fried bread. Not for people on a diet, but if you get the chance: try it! Often only made on Sundays in typical Portuguese restaurants. The locals make it the purpose of their day off: to have this dish as their lunch (that can take hours) in a restaurant with family. 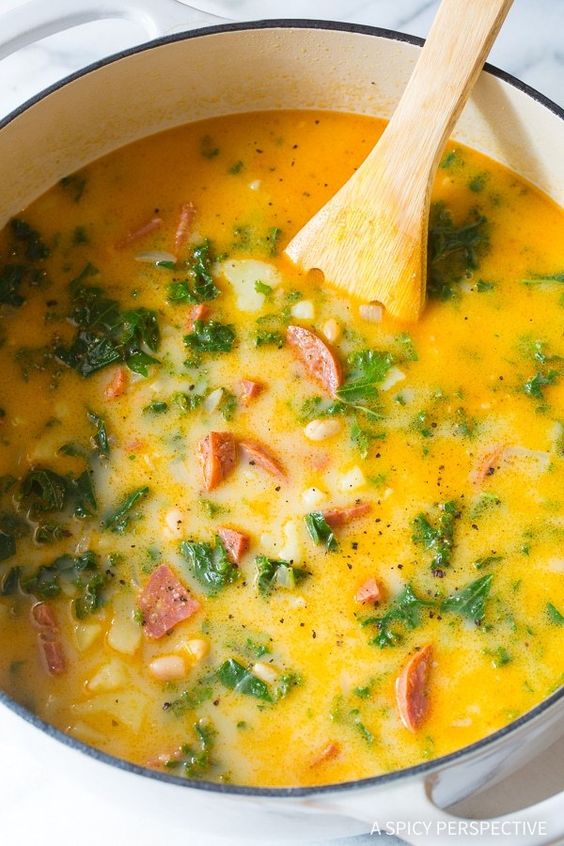 A meal is not a proper meal if it is not started by a soup. Portuguese love soups and are specialists at it. The most traditional one is Caldo Verde (a green soup made of cabbage, onion, garlic, potato and chorizo) There is a huge range of soups made of vegetables. Often one of the few options for vegetarians. Richly filled soups with beans, potatoes, meat. Just to get you started…

Before having dinner, some time end of afternoon or beginning of the evening, many Portuguese will be having petiscos with a beer. This can vary from a plate of caracois (snails boiled in garlic and oregano) to a plate of presunto (smoked ham), cheese, chouriço (sausage in all kinds of varieties and tastes) olives.. Bread is almost always served with every dish you might order. A meal without bread is not complete. 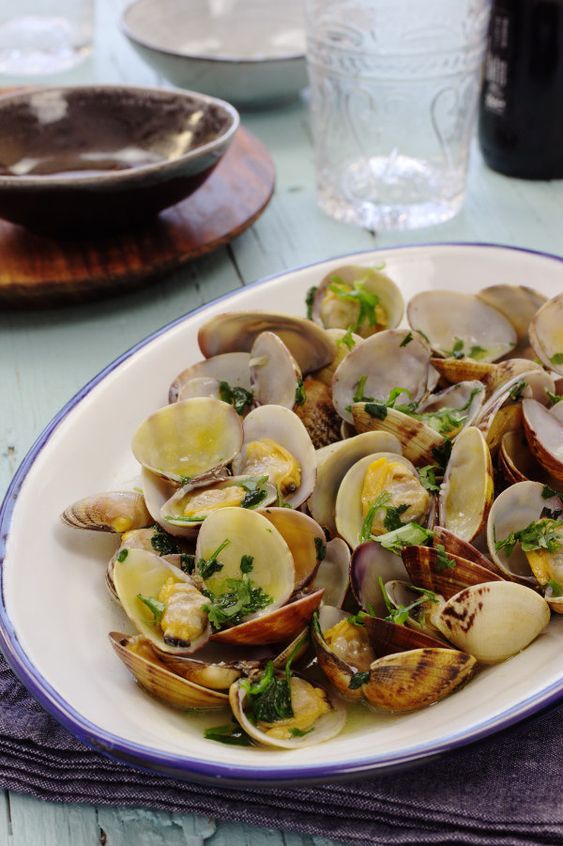 Fresh from the sea, you find it almost in every Portuguese restaurant. One of my favourite dishes in Portugal. On the menu, it is called: Amêijoas à Bulhão Pato a delicious traditional dish originally of the city of Lisbon that is prepared with clams coated with a sauce composed of olive oil, garlic, cilantro (coriander), and white wine. Yammie dish. Often served as a starter. 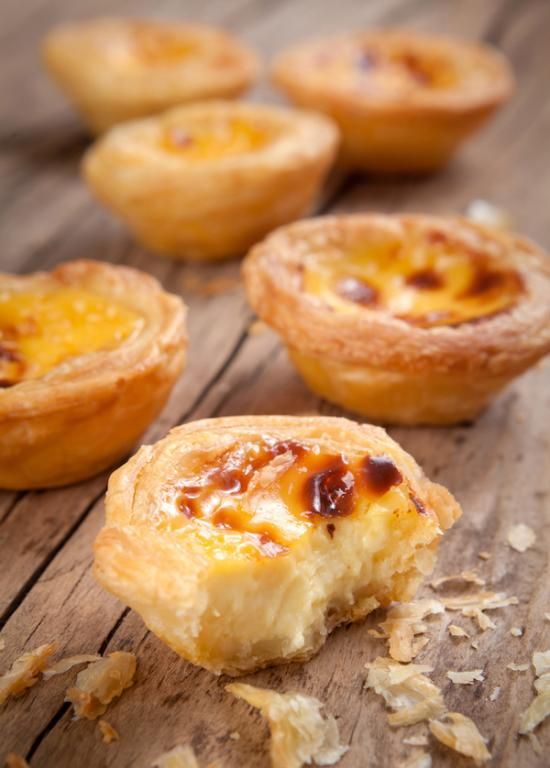 To finish off with a sweet touch, you cannot leave the country without having tried this famous Portuguese little egg custard tart that has its origins in Belem, Lisbon. The bakery that claims its original recipe since 1837 is often lined with customers queuing up for the pasteis de nata. We can certify that they taste even better than the regular ones found everywhere else in the country. I eat this when I have my coffee outdoors. Generally, I do not eat sweets, but this is not too sweet, and hard to resist.

And this is just a tip of the huge amount of traditional food specialities of Portugal. Be aware of the extra kilo’s you might put on enjoying all these delicious food in the Algarve!